We want to Protect Medway from exploitation from the mass developers looking to make a quick buck and leave our residents to clean up the mess.  We have adult residents who are still living with their aging parents because they cannot afford to purchase homes locally and are faced with rents which are criminal.

This month saw the residents of Rainham celebrating the dismissal of the AC Goatham & Son's application to destroy 126 acres of profitable, fruitful orchard in Rainham.  The full appeal decision document can be viewed here.

KMTV Interviewed Kate Belmonte and other key campaigners about their win in the fight to protect the Pump Lane orchards from utter destruction and how the Secretary of State's appeal dismissal decision will impact Rainham and Twydall residents.

Bernard was interviewed by Rainham News in relation to Medway Council's Local Plan.  "Everywhere you look there are sites, which should have never been developed".

This month we joined joined fellow campaigner Ron Sands and many other residents on Thursday 7th October outside the Full Council meeting at St George's Centre, Chatham.  Cat and our Green Team are calling for the HIF Project to be scrapped, a project which would see more than 12,000 homes built on this beautiful Peninsula putting at dire risk; multiple Sites of Special Scientific Interest, Special Protection Areas, World Renowned RAMSAR sites and the National Nature Reserve at High Halstow.  The developments would also drastically change the lives of existing residents across the Peninsula agricultural land would also . And to add insult to injury the Conservative led administration at Medway Council have also earmarked Deangate Golf Course for the residential development, Cat, Julian and the Medway Green team believe this should be made a Community Asset not a financial asset for Medway Council! They want to see a local plan for local people where housing need not developer greed is the driving force and where our precious green assets are protected with the same vigor as financial assets. 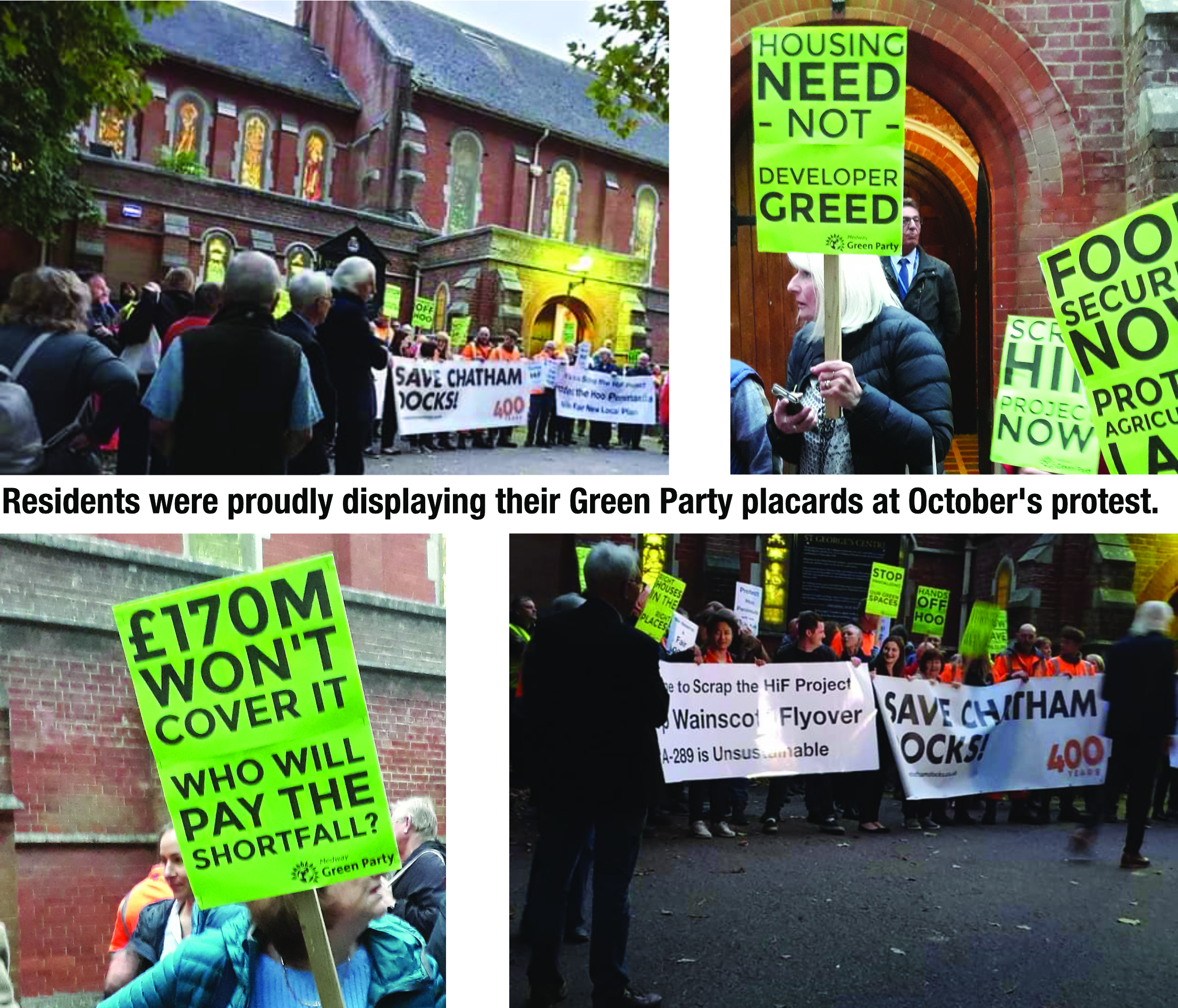 The Government are hell bent on squeezing every last penny out of the land Medway has to offer, but there is a group of 80 Rebel Backbenchers who are working together to fight the proposed planning reforms, highlighted in the Queen's speech in May 2021.

Please take the time to join our Letter Writing campaign requesting that our 3 Medway MPs; Kelly Tolhurst, Tracey Crouch and Rehman Chishti, join this group and fight against the "Build Build Build" mentality exhibited by central government under pressure from their party donors.

InFebruary 2021 MP for Gillingham & Rehman Chishti wrote a letter of support to Medway Council planners for a planning application in Second Avenue Gillingham.  The letter of support did not mention that the proposer, a local businessman, had donated to his parliamentary campaigns in 2015, 2019 and 2020.  This was reported to the parliamentary standards commission.  Kate Belmonte talks to Sandy from Rainham news about the findings of the commission and how we need to ensure that decisions in local and national government are undertaken ethically and without the interference of financial gains.

At either the last General Election or Local Election, I don’t recall Bellway, Berkley Homes, Countryside or Redrow being on the ballot paper, yet these are the names that are controlling our Central and Local Government.

We have a Housing Crisis. There are homeless people sleeping on our streets, homeless people staying with friends and relatives and people living in cramped and squalid conditions. There are thousands of people on waiting lists for social housing and thousands more waiting to find affordable accommodation to buy.

Over the last fifty years, the functions of both central and local government have been gradually handed over to the private sector to use as their own money-making enterprises. This is because the authorities won’t charge sufficient taxes, to pay for an equitable society, for fear of losing votes.

As part of the volume house builders’ money-making enterprise is a market led premise that shortages increase demand and raise prices.

Following this business model, the volume house builders have created a housing shortage and vast sectors of the population have suffered and continue to suffer as a consequence.

Part of the strategy is to obtain planning approvals and then not to construct any houses until their revenue can be maximised. In this way the volume house builders can completely control demand and ultimately price.

In Medway, the volume house builders have seen an opportunity to obtain approval to build on agricultural land, which is much cheaper to build on than brownfield sites, thus maximising their profits even more.

In 2020 a report by the CPRE, the countryside charity, stated that there is enough brownfield land for 1.3 million houses, and that what we need is a genuine ‘brownfields first’ policy from the Government. In the same report it was noted that the Local Government Association had found that over one million homes had been granted planning permission but not yet built out.

Medway Council is currently faced with a very small population growth that cannot sustain the services that it is obliged to deliver and needs new residents to provide much needed council tax revenue.

Medway Council have acknowledged that we are facing a climate emergency yet haven’t apparently decided to act on the reality staring us in the face.

The Medway Council area has a stunning physical geography inextricably linked to water, in the form of the River Thames and River Medway Estuaries.

Scientists tell us that globally there is, potentially, the equivalent of 70 metres of sea level rise, in the form of ice floating around in the polar regions of the earth.

Our volume house builders haven’t seemingly got a clue how to make houses carbon neutral, let alone carbon negative. So, until they have, let’s build where we already have roads leading to our brownfield and urban sites.

Rather than spend tax payers’ money on highway engineering works to open up grade one agricultural land for exploitation by the volume house builders, we should assess the damage that they have inflicted on the population and environment and, at the very least, force them to build out the planning approvals that they already possess.

We are told that the post covid-19 bill to the tax payer is greater than anything seen since the end of World War Two.

There would be no reason why similar heroic undertakings cannot be made now to save our environment while still housing all those who are in need.

We have gone a long way down the road to being subservient to business interests.

People who have worked hard to acquire professional qualifications are now expected to ignore their professional ethics and agree to proposals that they know are wrong and not in the interests of the people they aspire to serve.

It is not too late to put the genie back in the bottle, see some sense and protect our environment and our children’s future.

I am writing on behalf of the Medway Green Party to strongly object to the allocation of 200 acres of Grade One agricultural land at Chapter Farm for the construction of 1400 houses.

The site is adjacent to the Medway Council Area and part of the Green Belt that is intended to provide open countryside both around London and between Gravesham and the Medway Unitary Authority.

As such the land enjoys legal protection and any development other than for agriculture would be against the National Planning Policy Framework and current Government Policy.

The lack of connection of the site to existing urban areas and infrastructure within Gravesham and the proximity of the site to the Medway Council Area will put an undue strain on the existing facilities in Strood.

Medway Council will inevitably be faced with costs both financial and social when they are forced to share scarce resources with the new residents, of Chapter Farm, needing to access doctors, schools, shops and other services close to their new homes.

We recognize that recent misguided pressure, from Central Government to build more and more houses, has led to a frenzy of planning applications being made on agricultural land all over the South East of England.

Gravesham Borough Council, no doubt, now realize and acknowledge that the philosophy driving the demand to build more houses in the South East was mistaken and the housing need assessment algorithm generating the numerical demand was totally ill-conceived.

The Government has now had the good sense to recognize the errors associated with their previous housing policy and on Wednesday 16 December, 2020 issued details of a new policy that while creating homes for people to live in, will address many of the social problems and inequalities in society that have been highlighted by the current Covid-19 pandemic.

During the current pandemic we have realised how fragile our food supply chain is and in a post Brexit Britain we will need every square metre of available farmland to grow or own food.

The new housing policy calls on Local Authorities to make the most of vacant buildings and underused land in order to protect green spaces, with a focus for building on previously developed sites.

This approach will protect our farmland and at the same time make our urban areas more viable in terms of community with people once more living in our towns and cities. It will also help us to make our journeys more environmentally friendly, reduce carbon emissions and improve our air quality.

A housing needs assessment designed around population growth rather than mutant algorithms would show that Gravesham Borough Council needs to build many fewer houses than are currently shown in the Local Plan.

Apart from how many houses we build, what is more important for the future is how we build. The current Building Regulations are inadequate and we urgently need to reinstate the standard of insulation and construction that the previous Labour Government introduced under the UK Code for Sustainable Homes.

We were on track to be building net zero carbon houses by 2016. In the years between the policy being scrapped by the previous Coalition Government, millions of houses have been built that will now need to be expensively retrofitted to meet our international binding commitment to be carbon neutral by 2050.

The need to retrofit virtually every single building that has ever been built, is a salutary recognition that not only helps us appreciate the naivety of constructing buildings with such a reliance on fossil fuels to make them tolerable, but the accumulative impact on our environment and health.

The Royal Institute of British Architects and other professional institutes are calling on the Government to legislate for all new buildings to be net zero carbon from now on. The longer this change to our construction methods is left, the more expensive will be the measures needed to rectify it.

It is apparent that the volume house builders do not acknowledge the terrible legacy that they are creating while concreting over our farmland and countryside.

We are, however, confident that Gravesham Borough Council understand the need to conserve our resources and make better use of what already exists.