I hope this email finds you well, and, thank you for responding to my email.

Whilst the UK appears to be doing well at reducing carbon emissions, the CCC’s measure (as defined by the UN) gives an optimistic slant on progress.  It does not consider embedded carbon of imports.  As you are aware, we import significant amounts of goods and food.  Thus, say BMW, Mercedes or many Malaysian manufactured cars are not included, neither are many makes of washing machines, cookers etc, or cement or plasterboard, boilers, glass etc. Indeed, as our economy is strongest in the service sector.  We do not manufacture goods as we used to, before the Conservative Government of 1979.  Much of what we use in construction, or in households is not counted by the CCC.  In effect, we have ‘exported’ our carbon emissions.  However, DEFRA provide an estimate of the true improvements and these are not as flattering.  In 2013 the CCC identified this omission but has not addressed the issue in their guidance to the government.  DEFRA has produced a report called UK's Carbon Footprint 1997 – 2016 which is very helpful as this does include both production and consumption generated emissions figures.  It should be noted that DEFRA qualifies the consumption figures reliability as follows:

“Inherently the emissions relating to overseas production of imports to the UK, often referred to as emissions that are ‘embedded’ in imports, are not as easily measured as emissions generated within the UK borders. There are general conventions on how to do this but the results cannot be viewed as being as robust as the estimates of carbon emissions generated domestically.”

Carbon dioxide equivalent emissions including both those emitted by, and as a consequence of goods consumed in the UK between 1997 to 2016 are shown below: 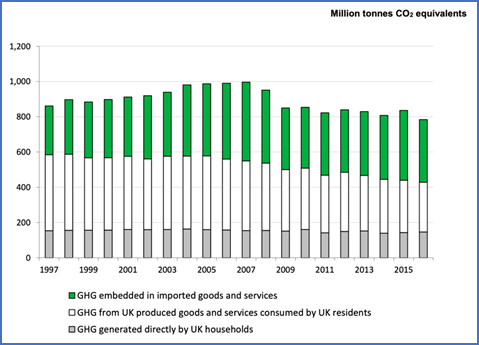 It shows a different reality to how the CCC report the figures.  Interestingly, these figures are not referred to by the Government.

The UK economy, and the world economy had a severe recession in 2008, which reduced both consumption of imported goods and production of UK goods.

Moving to the progress of the Government, again, your view glides the lily somewhat.  I refer to CCC’s report dated June 2021 (attached for your ease ease).  The salient paragraph (on page 6 of the attached document) is damming for the Government:

Therefore, I am concerned that at a time when policy is required the appointment of a minister who is a devote climate change denier further adds to the ‘climate contradictions’.  I trust that you will hold the cabinets ‘feet to the fire’ with climate change.

We need clear policies and leadership.  In recent weeks, the Prime Minister has started to say more of the right things.  However, the Conservative Governments normal response is to leave it to the market to solve problems, and this will not be sufficient.  The targets set by the Prime Minister are ambitious, agreed, and we will need ambitious direction and leadership to achieve them.  This we have yet to see.  Having an ardent Climate Change denier on the Cabinet table hardly gives confidence, and adds to the ‘climate contradictions’.

I hope that you hold the Governments feet to the fire on this.  We cannot keep missing targets.  When they say they will issue a policy or document, it must be issued.  We cannot have lax, or backward documents being issued that do not meet the targets.  I will wait to see the performance of the Trade secretary, but if the Trade Secretary deviates from Government policy on Climate Change, I will remind of the email below.  Lets hope that never happens!